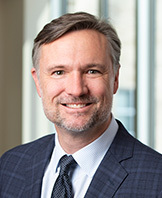 John McFarland represents clients facing high-stakes business litigation, whether as a plaintiff or a defendant. Over the course of his twenty-plus-year career, he has tried many cases in the state and federal courts of Texas, including cases involving oil and gas interests, breach of fiduciary duty, breach of contract, shareholder and partnership disputes, commercial fraud, tortious interference, and business dissolution. He has successfully briefed and presented oral arguments to the Fifth Circuit and the Texas state courts of appeal. His broad experience in trial and appeals further gives him the insight necessary to give strategic advice designed to position, avoid, or minimize potential litigation. With over fifty years’ experience between them, John and his partner Jeff Joyce formed Joyce + McFarland LLP in 2008, a boutique litigation firm aimed at providing top-flight services and value to clients who know the difference.

John has achieved the rating of AV Preeminent, Martindale-Hubbell’s highest rating for both ethical standards and ability, and has been recognized as a Texas Rising Star and a Super Lawyer for the past several years by Law & Politics Magazine published in Texas Monthly, and as one of Houston’s Top Lawyers by H Texas and Houstonia magazines. Avvo.com has rated him 10/10 for over a decade.

Congratulations to J+M LLP partners Jeff Joyce and John McFarland for being included in the 28th Edition of Best... View More